On March 8, 2022, top-selling indie artist Tom MacDonald called out music sales data collection agencies based on personal experience with his 2022 album The Brave. What happened afterward raises serious questions about the true picture of physical album sales versus what many music experts say. 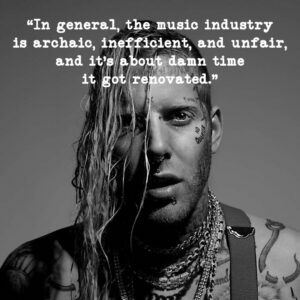 For weeks now, RCS Music News Weekly has been questioning the validity of reported sales data for physical and digital albums. Last week, Alberta-born indie artist Tom MacDonald dropped a bombshell on the same subject. In doing so, MacDonald once again lived up to his name as someone who isn’t afraid to say what other people are thinking, and starkly lent evidence and clarity to a subject about which RCSMNW had only speculated.

On March 11, 2022, MacDonald issued a press release noting that during the week of March 4-March 11, he’d sold the most physical albums for his new collaboration, The Brave with Adam Calhoun. Combined with digital album sales, overall sales were enough to place The Brave at #1 on the Billboard music chart.

However, despite Herculean attempts, he couldn’t get his sales data recognized to place on the chart. At least, not right away.

The Issue Was a Third-Party Data Collection Agency

As explained by MacDonald in his viral video The Biggest Music Industry Screw Job Ever (released March 8, 2022):

So too did some of MacDonald’s music associates, who asked of the agency, “Do you guys even have a mechanism or process to account for truly independent artist numbers? Does that even exist?”

The agency said it did but refused to provide specific information.

At his wit’s end, MacDonald fired a warhead of an email to the agency, demanding that they either help him or direct him to someone who could.

He Never Heard Back from the Agency

Realizing something was fundamentally wrong, MacDonald created his viral video in which he stresses that his ordeal was not just about him. It involved all independent musicians.

“It’s your albums,” he says. “It’s your careers. It’s your blood, sweat, tears, time, and money that [the data collection agencies] are refusing to acknowledge on the industry charts.”

To help indie artists, MacDonald urged people to action, saying, “Musicians! Show this to your friends,” adding, “In general, the music industry is archaic, inefficient, and unfair, and it’s about damn time it got renovated.”

MacDonald also spoke directly about the Billboard chart, saying, “It’s supposed to represent all of us, accurately.” If data agencies weren’t accurate or even willing in their collection and delivery of data about indie artists, then MacDonald had to wonder, “What do the charts even mean?”

In other words, MacDonald was arguably forced to play the biggest card he could to change the situation. Though he respected Billboard, he prodded the giant by urging people to question the very value of Billboard.

Here’s Where It Gets Interesting

On March 14, 2022 (six days after releasing The Biggest Music Industry Screw Job Ever), Billboard announced The Brave at No. 1 on its Top Album Sales chart.

Though Billboard offered no details about why they’d suddenly placed The Brave at the top of the charts, it’s not difficult to formulate a logical theory:

So, What Are Some Key Takeaways from All of This If You’re an Independent Musician?

The first is the viability of music released on a physical medium, like CDs.

Despite claims by some music industry organizations and experts that CDs are dead, MacDonald shows in spades that he achieved his Billboard-charting numbers through albums “actually sold (not streamed or TikTok’ed).” He further emphasizes in his video that his sales were chiefly from CDs, which MacDonald has been releasing for some four years, serve as MacDonald’s primary sales model, and are a large part of why MacDonald is estimated to be worth $3 million.

So, where are some industry experts getting their data to say things like CDs are dead?

This raises the second bigger question: What is the overall reliability of reported music sales data?

Not every independent artist has the means or motivation of MacDonald to do battle with data reporting rules and regulations, and not every indie artist has the same kind of clout to become a warning blip on Billboard’s radar. Moreover, it remains unclear why the data agency resisted the collection and reporting of MacDonald’s sales numbers to Billboard. It’s only known that they did resist.

If This Is True, Then the Conclusion Is Obvious

Major music labels, industry organizations, and experts can say that certain physical music mediums are on a downward trend or dead. Yet if they’re relying on facts collected from outside agencies, then:

ICYMI: CARAS and CBC recently announced the Arkells, Avril Lavigne, Charlotte Cardin, and Mustafa as the first round of artists confirmed to perform at the 2022 JUNO Awards.

Thinking of investing in cryptocurrency to bankroll your music? If so, CIRA Canadian Shield recently reported that fraudulent crypto and streaming platforms were the most common types of scam sites blocked by Canadian Shield.

How much money are scammers hauling in from Canadians?

In 2020, Canadians lost over $11 million to digital currency scams.

In response to warnings of a hunger crisis in 2022, which according to the United Nations World Food Programme (WFP) “threatens to unleash starvation, destabilization, and mass migration around the world,” the WFP recently partnered with its Goodwill Ambassador Abel “The Weeknd” Tesfaye to launch the XO Humanitarian Fund.

The goal of the funs is to provide immediate life-saving support to people who are on the brink of starvation. To assist the the WFP’s goals, Tesfaye has made an initial $500,000 USD donation to the fund and is contributing $1 USD from each ticket sold in North America for his After Hours ‘Til Dawn Stadium Tour.

In conjunction with this, the WFP’s US directors, together with donors, will contribute $1 million to assist families on the frontlines of hunger, in countries like Ethiopia, Afghanistan, Yemen, and now the Ukraine.

Said Russian fertilizer and coal billionaire Andrei Melnichenko earlier this week, “A global food crisis looms unless the war in Ukraine is stopped.” Melnichenko is among several of Russia’s richest businessmen who’ve publicly called for peace since President Vladimir Putin ordered the Ukraine invasion on Feb. 24, 2022.

As part of a new Make Listening Safe initiative to protect more people from hearing loss, the WHO recently recommended public protective measures that include:

All of this potentially puts music venues in a sticky, difficult, no-win situation.

On one hand, no music venue operator is going to object to the WHO’s goal to protect more people from hearing loss, especially when the risk involves children. Indeed, many music venue operators currently choose to follow safe sound practices, including the provision of hearing protection equipment for children and other audience members. Yet the WHO doesn’t want to give music venues a choice.

Much like mandated COVID restrictions that hammered music venues during the pandemic and caused many to close, the WHO wants governments to “develop and enforce legislation for safe listening and raise awareness of the risks of hearing loss.”

Framed another way: The WHO wants governments to effectively stand behind mixing boards at live shows and force music venues to dial down the volume if it gets too loud, and for infractions, it’s not difficult to imagine fines and other government penalties like those currently in force in other industries.

Spread the news! Help us grow!