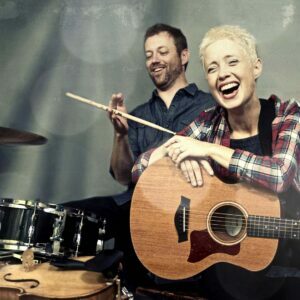 Born out of a collaboration that won them a JUNO Award in 2014, the ferocious folk-pop musical duo Big Little Lions (Helen Austin and Paul Otten) are scheduled to perform on Sept. 30, 2022, at Royal City Studios.

“The duo’s sound mixes the new school folk of Mumford and Sons with a dance rhythm that keeps the music sounding light and upbeat.”—The Examiner

Dubbed “a blissful marriage of new folk and sophisticated pop” by the Mariposa Folk Festival,” Big Little Lions were also described as an “energetic tour de force” by PopMatters.

Open jams are back at Royal City Studios! Yes, real people are now connecting with other real people in a non-Zoom setting, and you’re invited to join!

Earlier this week while accepting Billboard’s 2022 Woman of the Year award, former teen actor turned pop star Olivia Rodrigo praised prior female songwriters and music artists for giving her strength and inspiration and spoke about being lucky for her career.

“Every woman here today,” said Rodrigo during her acceptance speech, “is working hard to break down those barriers and change the narrative and support each other.” She also talked about being moved by young women who write songs every day from their bedroom floors, saying, “I’m constantly moved by your vulnerability and your creativity and bravery, and I promise everyone here today is working to make this world and this industry a better place for you.”

Rodrigo’s first album, SOUR, led to all 11 tracks landing in the top 30 of the Billboard Hot 100 chart. Rodrigo is the first female artist to achieve this feat.

Announced a few days ago, Bandcamp will become part of Epic Games, the American video game and software developer known for Fortnite and Unreal Engine, and Bandcamp founder-CEO Ethan Diamond wants to reassure artists that the move will only strengthen Bandcamp’s commitment to artists.

“The products and services you depend on aren’t going anywhere,” said Diamond, who will continue to lead Bandcamp and keep it operating as a standalone marketplace and music community. “We’ll continue to build Bandcamp around our artists-first revenue model, where artists net an average of 82% of every sale. You’ll still have the same control over how you offer your music. Bandcamp Fridays will continue as planned, and the Daily will keep highlighting the diverse, amazing music on our site.”

While other companies have asked Bandcamp to join them over the years, Diamond says they didn’t share Bandcamp’s vision and values.

With Epic Games, Diamond says, “we share a vision of building the most open, artist-friendly ecosystem in the world.” This includes an expansion of Bandcamp’s basics like album pages, mobile apps, merch tools, and payments system “to newer initiatives like our vinyl pressing and live streaming services”—all good news for artists now done with music streaming services like Spotify.

The move by Epic Games also stands as further evidence that downloads are not dead, since it’s highly unlikely that Epic Games would entangle its bottom line with Bandcamp if the download platform wasn’t showing a profit and had potential for growth.

Based on your listening habits and playlists, the algorithms start cueing up song, band, and playlist suggestions, which are certainly handy for discovering new music. “However, this well-intentioned service has a downside,” writes Laut gegen Nazis. “Once you listen to one of the many right-wing bands, more and more fascist music is suggested to you.”

In response, Laut gegen Nazis created the fake Nazi band Hetzjaeger and their debut single, “Kameraden” (comrades). Designed to manipulate algorithms so smartly that they work against Nazi bands, the song clearly lets listeners know by the second verse that Hetzjaeger has set out “to finally put an end to right-wing music on streaming platforms.”

How successful has Laut gegen Nazis been in its objectives?

According to the organization, the initial teaser release of “Kameraden” alone so quickly trained the algorithms that within a month, “the teaser was recommended to over 120,000 right-wing extremists in Germany and around the world,” adding that the song even infiltrated “big fascist groups on Telegram to secure their support.”

If you missed Verese Vassell-Bowen’s recent Fourth Friday concert, put on as a joint effort between Guelph Museums and the Guelph Black Heritage Society during Black Heritage Month, you can watch it on YouTube in two parts:

The performance is the Guelph-based singer’s first live show since pandemic lockdowns and restrictions began. Gracing the Canadian gospel scene in 2016 with her debut album Forever Praise, Vassell-Bowen’s style blends traditional and contemporary gospel, neo soul, and even spoken word for a soul-stirring musical style.

Her music can be found on music streaming outlets like Apple Music and Spotify, and her CDs can be found at The Bookshelf in downtown Guelph and CD Baby.

Earn good karma by sharing this issue of RCS Music News Weekly with a friend.