This week, we were finally able to release our first issue of 2022 after finding the RCS Music News Team. They’d gone dashing through the snow during Lockdown-mas (because there was little else to do) and evidently got lost somewhere in the Rockwood Conservation area. Given the near impossibility of getting lost in the conservation area, we suspect alcohol may have been involved. Anyhoo, after informing them “Yup, we’re back in Step 2” and stopping one team member from banging his head against a desk, here’s what they found this week in music news, including the continued comeback of vinyl records and the ongoing bitcoin debate. 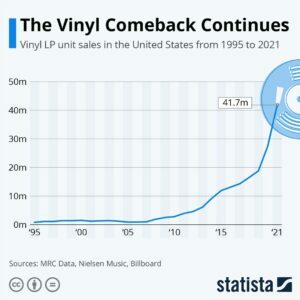 According to MRC Data’s 2021 year-end report, vinyl record sales grew in the U.S. for the 16th consecutive year, with vinyl sales increasing by 50.4% to surpass both CD and digital sales. In total, 41.7 million records were sold in the U.S. last year, which represents a 45-fold increase in vinyl sales compared to 2006, when the vinyl comeback began.

“Physical goods, it appears,” writes Felix Richter in a Jan. 12, 2022, report for Statista, “still hold value for many people, even in the digital age.”

Though vinyl record sales only amounted to 4.7% within the total spectrum of album consumption, which includes streaming and downloads, Richter writes, “It’s fascinating to witness a hundred-year-old technology come back from near extinction,” due in no small part to Gen Z.

Defined as people born between 1997 and 2015, Gen Z (born with no memory of a world before the internet) “have an ingrained nostalgia for the time before,” writes Stephen Jabaut in a September 2021 article for EDMTunes. “They love thrift stores, and remnants of the not-yet-forgotten analog world, and that includes vinyl records,” defined by Jabaut as, “analog comforts in a digital age.” 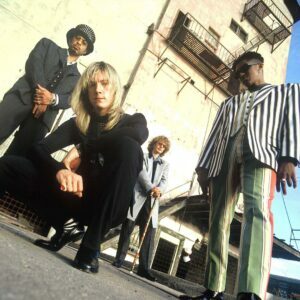 Twenty-eight years after André Cymone, Mic Murphy, Paul Peterson, and Gardner Cole got together at Cole’s house to record funk and soul music, 14 tracks from their recording sessions recently surfaced on the new album The Mighty Soulmates Vol. 1 (Mod Squad). Embodying the same soul and funk styles that Bruno Mars and Anderson .Paak would revive in 2021 on Silk Sonic’s debut album An Evening with Silk Sonic (available on vinyl and cassette, as well as a digital download), Vol. 1 offers an eclectic mix of musical styles, from the 1980s’ Minneapolis sound (reflected in the tracks “Hollywood” and “Tied to Your Pocket”) to James Brown-style funk.

During the original recording sessions, the tracks dropped into oblivion after Cole’s Southern California home was damaged by the 1994 Northridge Earthquake. “I’m honestly not sure what happened,” recalls Cymone. “I think with all those talented artists, they probably got busy and drifted back to their commitments. I know my life at the time was insanely crazy.”

“I believe we shopped it,” adds Peterson, “and nothing really happened with it. We all led busy lives and it just sat there, marinating like a fine funk masterpiece. Everything has its right time and now might just be the time.”

>> Preview or purchase Vol. 1 on smartURL 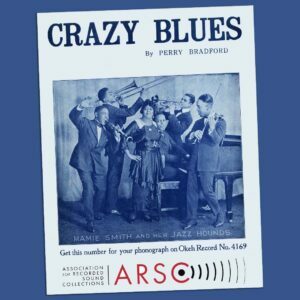 On Jan. 1, 2022, an estimated 400,000 vinyl sound recordings made before 1923 entered the U.S. public domain. Announced on Dec. 8th, 2021, by the Association for Recorded Sound Collections (ARSC), the recordings are now legally available to the public for any type of use, which offers video creators a massive resource to avoid YouTube’s three-strikes copyright infringement and possible channel termination.

As old as the sound recordings are, they document (in surprisingly good sound quality) the earliest beginnings of jazz, blues, Vaudeville, and early pro- and anti-war songs. They also include historically important spoken sound recordings of people who battled for and against Prohibition and the passage of the 19th Amendment to the U.S. Constitution, which legally guaranteed American women the right to vote. 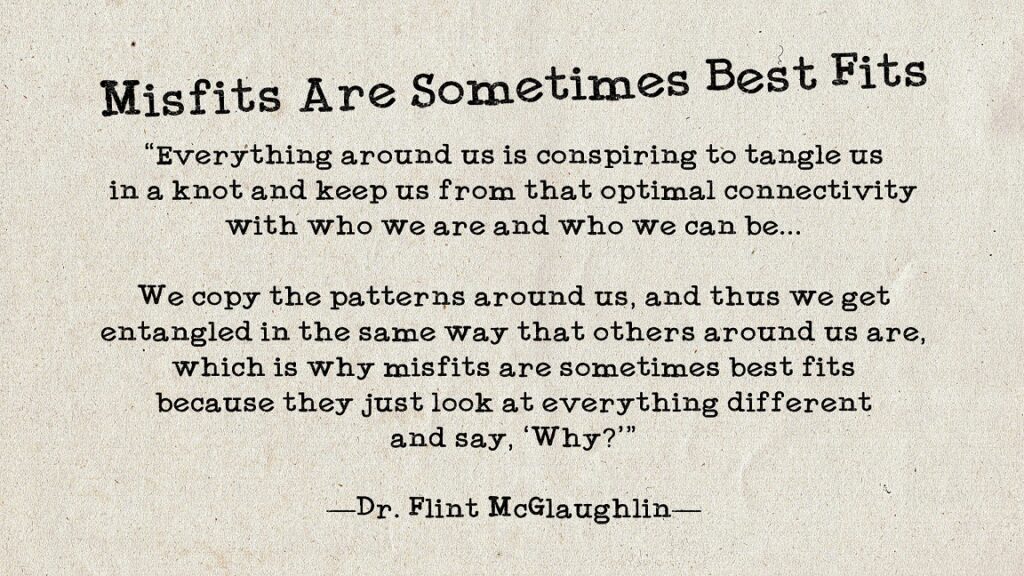 If you’ve ever had a moment when you’ve felt that your music doesn’t quite fit in and you should perhaps chart another musical course, philosopher and marketer Dr. Flint McGlaughlin recently praised the misfit in an interview with Legion Athletics founder Mike Matthews.

While the framework of the interview was about business, Dr. McGlaughlin was speaking about people in general—much like Steve Jobs did in 1997 when he said, “Here’s to the crazy ones, the misfits, the rebels”—and sharing Dr. McGlaughlin’s words seemed appropriate for any musician who has experienced doubt.

The Rise and Fall of Bitcoin

Last May, Legacy Records became the first known record label to pay its artists in cryptocurrency (a.k.a. bitcoin). Said Legacy Records CEO Keishia McLeod in a release by Phantom Consulting, “What we’re working on will allow many other income streams for artists for real wealth,” adding, “this is the future, not a trend.”

And other record companies are reportedly ready follow the trend. “Just as eager,” says the Phantom release, “a major music distributor has jumped on board with Legacy Records and is just as ready to pay out artists in bitcoin.”

As shiny and spanking as Legacy and Phantom are painting the future, Statista writer Martin Armstrong recently pointed out the side of bitcoin the companies didn’t mention. In a Jan. 7, 2022, article, Armstrong said, “Bitcoin is still famously susceptible to dramatic rises proceeded by equally rapid falls.” As an example, Armstrong cites bitcoin’s surge to an all-time high of over $60 thousand in April 2021 before plunging to around the $30 thousand mark at the end of July. While the bitcoin rollercoaster tracked upward afterward, Armstrong further points out China’s recent crackdown on crypto and the political tides that can (and do) cause bitcoin price crashes. Indeed, The Guardian recently ran the blunt headline, “Bitcoin: Be prepared to lose all your money, FCA warns consumers.”

Further to this, The New York Times recently pointed out the “astonishing amounts of electricity” used to support bitcoin’s existence. “The process of creating bitcoin to spend or trade consumes around 91 terawatt-hours of electricity annually, more than is used by Finland, a nation of about 5.5 million.”

Despite this (or being simply unaware of it), McLeod said, “I don’t think any business can afford to remain complacent in regards to the future,” which is a statement based on record company balance sheets and not environmental consideration.

RCS Music News Weekly certainly isn’t a qualified financial advisor, and any decisions you may make about bitcoin are certainly your own. Yet if environmental considerations matter to you, or if the sheer volatility of bitcoin seems too precarious, you might want to consider foregoing any digital wallet offers from a record company and opt for regular old cash, if for no other reason than the relative anonymity.

In a digital world where online spending can be tracked and traced and companies seek to know and monetize the behaviors of people, CNBC business journalist Kelly Evans notes in a May 25, 2021, article, “The best option for leaving no trace of spending behavior is the good, old-fashioned greenback,” adding, “Thanks to crypto, cash is actually starting to regain its luster.”

Finally, Huge Thanks Again from Everyone at Royal City Studios

Last year saw the closure of many live music venues and rehearsal facilities because of the pandemic, which also took a heavy toll on Royal City Studios. Yet RCS managed to remain open, due in no small part to the support of area musicians. In recognition of this, RCS gave its deepest thanks over the holidays, reprinted here because the gratitude remains:

“We can’t thank people enough for supporting us through a difficult year of lockdowns and restrictions, even when the lights were out, and area rehearsal facilities were closing. Thank you for coming out to the open jams, rehearsal studios, and recording studio. By doing so, you helped us as much as we hope we helped you. From day one, we’ve been here to support all area musicians, and it has been of great joy to know that support is reciprocated.”

Given recent reports by health and news agencies like the WHO, Reuters, and CNBC that the pandemic could be over in 2022 (meaning classified as endemic), RCS certainly looks forward to a brighter year ahead for both bands and itself. To that end (literally), RCS recently announced that all new stage lights may be going up in 2022 to better serve bands and add a bit more show to live shows when they return. 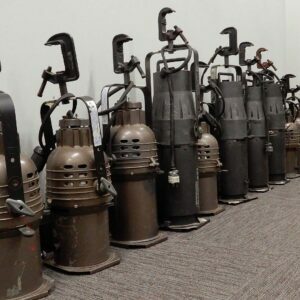 Yes, the lights do sort of look like Daleks.

Said another way: The lights are one more example of Royal City Studios’ continuing commitment to invest in area musicians and support their creative goals by providing an open, accessible, and affordable facility for rehearsals, recording, and live performance, but they need your help.

The RCS Music News Weekly team realizes that musicians have different comfort levels right now and that restrictions may float in and out like some uninvited party crasher who can’t take a hint to get lost, but once you’re comfortable, here are four ways to help support Royal City Studios’ continued operations:

Exclusive for Bands—No Cost to Book the Hall

No catch. To help get live music rockin’ again, bands can book the hall for no cost. Bands take home ticket sales, plus sales from any merch they choose to bring along. There’s no cost for cancellation. 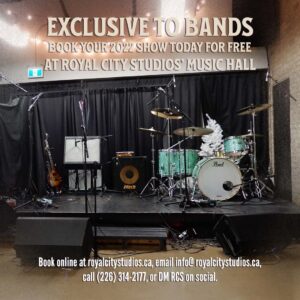 Head to the RCS membership page for enrolment info.

Until next time, stay awesome, and here’s to a year ahead that isn’t a 2021 do-over.