This week in RCS Music News Weekly: RockHouse predicts a post-pandemic live music Renaissance, Royal G Symphony makes their radio debut across the pond (yup, on actual radio), and a local prison option for Guelphites that’s way better than banging your head against a desk during lockdown.

The New Best Days and Times to Post on Social

With few options left for musicians, music venues, and rehearsal/recording facilities to engage audiences outside of social channels under Ontario Premier Doug Ford’s recent shutdown order, which has angered many for its seemingly arbitrary nature, a sheer survival question for anyone in the music industry naturally becomes, “What are the best times to post on social?”

Okay, the more pressing question may actually be, “How do I get through the next few weeks without banging my head against a desk?” But since such activities are not conducive to well-being, RCS Music News Weekly highly recommends the healthier option of focusing on creative pursuits and connecting with people through social.

According to recent findings released by HubSpot and Sprout Social, here are the best days and times to post on social:

For music magazines, promoters, band/label publicists, and other music-related businesses/occupations that fall into the media category, the best days and times to post on social are a bit wider.

While Saturday and Sunday still represent poor engagement days for the media, audiences are still checking online for updates about what’s happening. While engagement is light every day before 5 a.m. and after 6 p.m., reliable engagement tends to occur on weekends from 8 – 10 a.m. and at 5 p.m.

For media, optimal times to engage audiences on Instagram were different than on Facebook, with higher engagement times split between morning and afternoon.

For the media, engagement is most consistent Monday through Friday from 8 – 10 a.m. and 2 – 4 p.m. Similar to other industries, low engagement occurs every weekday before 5 a.m. and after 9 p.m., and Saturdays and Sundays are the worst days to post.

The media generally has a little more flexibility for engagement on Twitter.

Engagement is most consistent Monday through Friday from 8 a.m. – 1 p.m. and there’s a bit more activity on weekends than other platforms.

RCS Music News Weekly will have a feature next Friday, including exclusive artwork. Until then, enjoy the band’s hilarious teaser trailer for “The Jake Revival” music video, also being released next Friday.

Last week, RockHouse Live Clearwater Beach opened the doors to its entertainment-themed restaurant, bar, and live music venue. “We were expecting a few people to come,” said RockHouse founder Zach Blair. Yet with people hungry for live music again, RockHouse was packed from opening until closing, “from the first day and then every single day since,” added Blair. Said one woman, “This is the first time in a year I’ve laughed,” adding, “I feel like I’m ten years younger!”

Given the experience, Blair and Jock Weaver, former president of Hard Rock Café International, predict “an entertainment Renaissance about to explode across the globe.”

That’s an explosion RCS Music News Weekly can get behind.

Going for another walk may sound about as exciting as washing your hands for the millionth time, but here’s how to make it an opportunity.

If you’re looking for a cool location in Guelph to shoot band photos or video and you haven’t visited the abandoned Guelph Correctional Centre and surrounding lands on York Road, you may want to head there soon. Developers want to turn the location into homes and businesses as part the Guelph Innovation District Secondary Plan.

A Guelph group called the Yorklands Green Hub wants the location to be transformed into a self-sustaining education, demonstration, and research hub, and others are calling for the location to be designated as a heritage site. Yet there are marker stakes in the ground, and several conversations by RCS Music News Weekly with local park visitors (including one impassioned protester) suggest you may wish to head to the location soon.

Formerly called the Ontario Reformatory, the facility was in operation as a correctional institute from 1911 to 2001. During much of that time, the facility served as a progressive prison farm to teach inmates about woodworking, stone masonry, and other skills to help them re-enter the workforce.

The location was also used for filming the 2011 horror movie Cell 213 and hospital scenes for the 2008 movie Blindness, and was featured in the TV series Ghost Trackers (because any abandoned prison surely must be haunted).

“Royal City Studios will be closed during this latest lockdown from April 8th until at least May 5th, hoping to re-open on May 6th pending confirmation from Doug Ford and Public Health.

The booking calendar has been blocked during the lockdown period, but you can still book a session after May 5th.

On a personal note, I want to thank you all for your ongoing support. While it has been a difficult year for everyone, it’s important that we all do the best we can to return to a normal way of life. I know that this time has been painful for many of you, some more than others. We’ll be here providing your musical escape as soon as we can. In the meantime, stay safe and healthy.”—Jim

As an adjunct to Jim’s message, RCS Music News Weekly would like to add a few words of truth and hope from an RCS social post made Feb. 27th, 2021:

“A live show locked in a box, waiting for dawn. If today was an album cover, it might be this. Artists (like all) have been locked inside the COVID box for a long time. Makes it hard to see that dawn’s coming. But it is. It’s still a bit beyond the lockbox right now, but the box will soon open. People will exhale deeply. The show will go on, because as Freddie reminded us all, “The show must go on.” The lights will fade up. The amplifiers will rumble. Microphones will call down the thunder and cry, “Are you ready!” A percussion of voices will cry back, “Yes!” And the long days of oubliette lockdown will drop as quickly as, “1, 2, 3, 4!”

Long live rock (or whatever music you play). 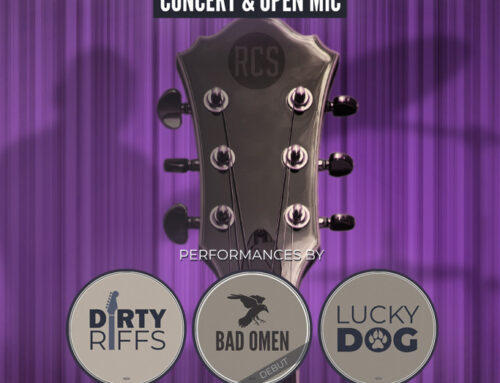