As 2021 winds down, the RCS Music News Weekly elves have been busily gathering yet more breaking music news stories. By “elves,” we of course mean our RCS music news team, who were forced to scrounge elf costumes from Value Village after unwisely throwing a pre-Festivus party and waking up to find their closets had mysteriously been ransacked. (We’re still trying to piece it all together.) Anyway, here’s what they discovered after they hit the streets (jingling all the way):

Two years after releasing his self-produced 2019 EP Luminil, Toronto guitarist/songwriter Dylan Hennessy celebrates the anniversary of his instrumental prog-rock masterwork with “The Watcher,” a new addition to his Luminil project.

Slated for release shortly before Xmas, “The Watcher” is more than a continuing testimony to the technical brilliance of Hennessy as a guitarist and songwriter, who humbly does not call himself a shred master (but is one nonetheless). Capturing a rich tapestry of sounds and staggeringly intricate guitar leads, “The Watcher” evidences why promoter/musician Anthony Dell’Orso (Of the Bear Bookings) calls Hennessy “a maestro at his craft,” and why Hennessy continues to draw audiences at music venues and festivals across the country.

Avril Lavigne Kicks Off Her Bite Me Canada Tour Next Year

On May 3, 2022, Avril Lavigne kicks of her first Canadian tour in over ten years. The Bite Me Canada 2022 tour (named after her recent release, “Bite Me” featuring Blink-182 drummer Travis Barker) will play 14 cities in Canada, starting in Moncton, NB, on the 3rd and ending in Victoria, BC, on May 25th. The tour features special guests grandson (singer-musician Jordan Edward Benjamin) and Mod Sun.

“Bite Me,” according to Lavigne, is “an anthem about knowing your worth, what you deserve, and not giving someone a second chance who doesn’t deserve you.” If that message doesn’t come through in the song, her video makes it as clear as a sledgehammer against a door.

Lavigne will also release a new album in 2022, which also marks the 20th anniversary of Lavigne’s iconic Let Go album.

For fans in the Guelph and Tri-Cities area, the closest Lavigne will land on her tour is London, Ont., on May 10th and Toronto on May 13th.

Public on-sale begins Dec. 3rd, 2021, at 12 PM local. Windsor, Ont. general on-sale starts Dec. 17th at 10 AM EST. Tickets available at avrillavigne.com. $1 will be added to each ticket for the Avril Lavigne Foundation, which supports people with serious illness or disabilities.

Among Canadian artists up for the coveted gramophone at the 2022 Grammy Awards (including Justin Timbieb, the Weeknd, Allison Russell, and Drake), Canadian artists have a strong showing in classical music categories, including Steve Epstein (Producer of the Year, Classical) and Yannick Nézet-Séguin (conductor, Philadelphia Orchestra).

What are their chances of bringing home a Grammy against a packed American nominee list? It’s anybody’s guess, but in a roundabout way, Canada will have a presence across the Grammys. Last week, the Recording Academy announced Grey Goose Vodka as the “official spirit partner of the 64th annual Grammy Awards,” and any way you pour it, the goose is as emblematically Canadian as poutine and Timbiebs… er, Timbits.

Remember That Time When You Played Those Sweet Yellow Sonors in Rehearsal Studio 7 at Royal City Studios?

No? Book your test flight today, call (226) 314-2177, or email info@royalcitystudios.ca and they’ll get you strapped in. Bringing your band? Room 7 is large enough to accommodate them and comes complete with amps, PA, and keyboards if you need them.

All customers must provide proof of vaccination or a negative COVID rapid test within 48 hours of your booking.

As a complete rehearsal, recording, and performance facility for musicians of all ages, Royal City Studios is an inclusive, respectful, and accessible facility that includes a lounge for relaxing, drinks and snacks to fuel your jam, accessible washrooms, replacement items (sticks, picks, strings, reeds, etc.) in case you forget something or break something, and solid equipment tuned by a sound expert.

All you need to do is walk in, plug in, and play.

If RCS doesn’t have something you need, Long & McQuade is literally 5 minutes away at 30 Arrow Rd., just past Silver Creek Parkway when heading east on Woodlawn.

Quickly Direct Fans to Important Info on Your Band Website

How do you quickly direct fans to important information on your website? Google has a new feature that makes it easy. Simply go to a sentence or paragraph one a page, highlight it, then right-click and select Copy Link to Highlight. When you post this on social or Messenger, people are taken right to the highlighted text when they click on the link. 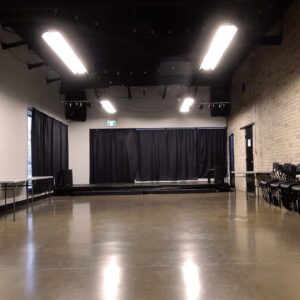 Book Your Own Concert at Royal City Studios for Free

With competitive booking continuing at many local music venues, Royal City Studios continues in its commitment to help bands and solo musicians of any budget or genre return to live performance. To that end, RCS will continue making its music hall for free* for artists to use in the New Year.

To make shows viable, musicians take ticket sales, plus revenue from whatever merch they may choose to bring along for fans.

“How can RCS do this? What’s the catch?”

There’s no catch. The RCS music hall operates as a licensed venue, meaning RCS realizes revenue from bar sales, just like many music venues operate. That’s it, and there’s no charge if bands decide to cancel.

Bookings include (at no charge) promotion on the RCS social channels and other channels. Posts include digital concert posters (which artists can use non-commercially on their own socials) and an Eventbrite listing with banner graphics.

For optimal poster images, bands are encouraged to send high-resolution photos (band shots, head shots, and/or whatnot) and a short bio to RCS once their music hall booking has been confirmed. To help maximize show attendance and augment RCS promotion, bands are also encouraged to promote ticket sales directly with their fan base.

*The RCS music hall is available for all types of events, including wedding receptions, fundraisers, off-site business meetings, jam space for large bands, and more. Yet free usage is currently limited to live musical performances.

Too Old to Rock? Pfft! The WHO Says Otherwise

Ever had that ridiculous adult moment when you feel you’re no longer young and perhaps too old to rock? Good news. If you’re between the ages of 18 and 65, the World Health Organization (WHO) has declared you a young person.

Before, based on the Friendly Societies Act (1875) in Britain, “old” was defined at age 50. However, the WHO has issued a new criterion based on the general health quality and life expectancy of people today:

In other words, to those who know they still rock, we salute you.

Tickets to all shows are available on the Rhythm & Brews website.

Symphony Hazy IPA and Run to the Pils—Exclusive to Royal City Studios!

A very limited number of these craft brews (only 50 of each) will be available at the show (though other brews will be available, plus spirits and coolers). The Friday concert is sold out and, as of yesterday, tickets for the Saturday show were nearly gone. Don’t miss out on these two incredible bands (and brews).

>> Get you tickets at Eventbrite

Huge shout-out to Yuri Collesso for coordinating everything and coming up with the beer names. (Iron Maiden fans will get the “Run to the Pils” reference.) Equally mondo shout-out to Xristopher Bland for designing the labels (and creating the slogans), Carol at Bob’s Posters and Signs for the printing, Monica at Rhythm & Brews for her ninja-fast labelling, and the whole Rhythm & Brews crew for making these specially labelled beers happen. You all rock.

Happy Holidays from the Most Interesting Santa in the World

This goes for us too. With the holidays right around the corner, the RCS music news team is taking a break for the remainder of December. (It’s been a very busy year writing and publishing RCSMNW each week since launching last February.) Yet RCSMNW will be back in January with bakery-fresh editions. Until then, from everyone at RCSMNW and Royal City Studios, we wish you and yours the very best of the holiday season.