This week, we once again sounded the mighty conch and cried, “RCS Music News Team, assemble!” Here are some of the breaking music news stories they found. 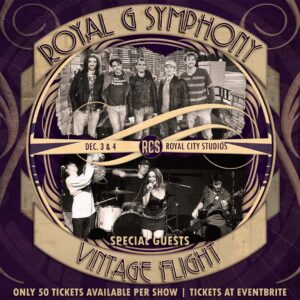 >> Get your tickets today at Eventbrite

Performing vintage rock and blues, Vintage Flight has rocked music venues and festival crowds across Ontario and in parts of the U.S. If you love Led Zeppelin, Rush, The Who or Black Sabbath, you won’t want to miss this band, whose talents are often compared to the bands that inspire them. Featuring Avalon Bridger (lead vocals), Jake Shepherd (guitar), Matthew Gaston (bass and vocals), and Tyler Shea (drums), Vintage Flight will amaze and surprise you with soul-filled powerhouse vocals, epic guitar solos, fat bass lines, memorable riffs, and drums that make audiences wonder how many hands one person can have. 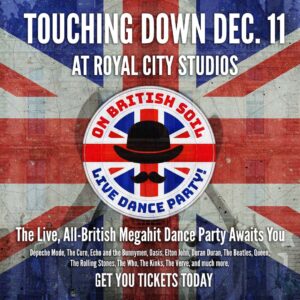 On British Soil Touches Down at RCS on Dec. 11th

If you like Depeche Mode, The Cure, Echo and the Bunnymen, Oasis, Elton John, Duran Duran, The Beatles, Queen, The Rolling Stones, The Who, The Kinks, or The Verve, this show is for you.

>> Get your tickets at Eventbrite

Any genre welcome. All instruments welcome: guitar, bass, keyboards, or wail the sax or drums without the neighbors shouting, “Shut up! Don’t make me throw my shoe at you!”

(Don’t you hate it when that happens?)

No cost to join. Negative rapid test or proof of vaccination required. Masks required outside jam studios and recommended inside as well, unless singing or playing a brass/wind instrument.

Join the party this Sunday! Free parking, accessible, snacks and drinks on site to fuel your jam. Let’s rock this joint! 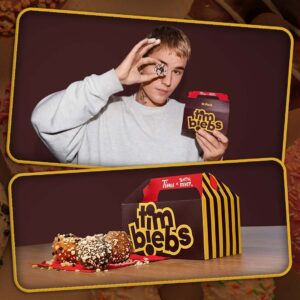 With a handful of weeks left in a weird year, you may be wondering, “Can 2021 get any weirder?”

Yup, lucky Canucks will soon be able to walk into Tims and say, “Give me a 10 pack of Biebs.”

RCS Music News Weekly certainly has little reason to doubt Tims isn’t close to the London, Ont.-born superstar’s heart or suspect he hasn’t dreamed of a collaboration with a brand as emblematically Canadian as beavers and poutine. Yet RCS Music News Weekly does have to wonder whether the Bieb ever actually dreamed of becoming a menu item, much less a bite-size donut.

Tims also announced a lineup of Timbiebs merch will become available at participating Timmies in Canada and the U.S.

Get a glimpse into Tom Petty’s creative process in Tom Petty: Somewhere You Feel Free – The Making of Wildflowers. The 90-minute film (available for free on YouTube) came about in early 2000 after a collection of 16mm film from 1993-’95 was discovered in the archive of the legendary musician. The film was shot while Petty was on a prolific songwriting streak and working on material for Wildflowers, intended to be a double album. 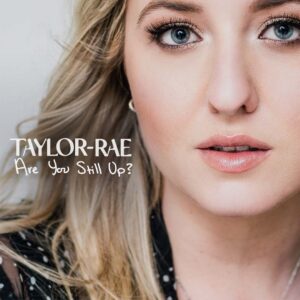 Taylor-Rae Drops Her New Video for “Are You Still Up?”

Yesterday, Canadian country/pop artist Taylor-Rae dropped her music video for her new single, “Are You Still Up?” Shot in Vancouver’s Gastown district by Matt Brascia (Brash Productions), the video captures the longing and emotions described in the lyrics. “We really wanted to convey the whirlwind of emotions that can creep in when you’re missing someone,” said Taylor-Rae. “From the feeling of restlessness, to lonely, to strong and right back to being vulnerable.”

Taylor-Rae’s vocal talent has led to work on songs with top country talent, including Carly Pearce, Adam Argyle, and Phil Barton, all of whom collaborated with Taylor-Rae on the new single. 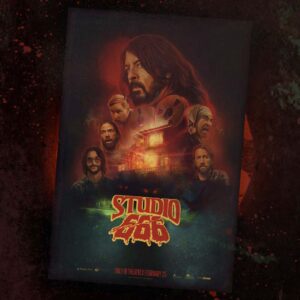 Art imitates life in the new horror comedy Studio 666, arriving in theatres on Feb. 25th, 2022. Shot in the same house where the Foo Fighters recorded Medicine at Midnight, the film follows a rock band as they record their 10th studio album in a haunted house, and that’s where art imitates life.

While recording Medicine at Midnight in a rented Encino house (built in the 1940s), band members were left spooked by what they believed were ghosts. In an interview with USA Today, Grohl said, “Everybody felt creeped out and you could go one of two ways. You could run screaming out the front door with your tail between your legs or you could put your head down and make nine songs and get the f**k out of there. That’s basically what we did.”

Though Grohl and crew didn’t report seeing any actual ghosts, Grohl added, “The worst part is just feeling it. It’s not like you’re seeing floating bedsheets and vomiting pea soup. It’s like you feel somebody next to you and hear footsteps or have recurring dreams of an old woman in a muddy sweater barefoot in your living room. Things like that.”

In the film, band members star as themselves, while actors Whitney Cummings, Leslie Grossman, Will Forte, Jenna Ortega, and Jeff Garlin will appear in as-yet-unknown roles.

In a statement about the film, Grohl said, “We wanted to recapture the classic magic that all of our favourite rock and roll movies had, but with a twist—hilarious gore that f**king rocks. And now, with the help of Tom Ortenberg and the team at Open Road Films, we can finally let this cat out of the bag after keeping it our best-kept secret for two years. Be ready to laugh, scream, and headbang in your popcorn. STUDIO 666 will f**k you up.”

Though Grohl says he found out about the history of the Encino house and what happened there, he can’t offer up details, having signed a non-disclosure agreement with the landlord, who’s trying to sell the place.

In other words, if you’re shopping for an Encino house any time soon, you may want to ask the real estate agent, “So, did the Foo Fighters record here?” 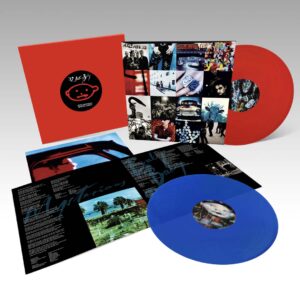 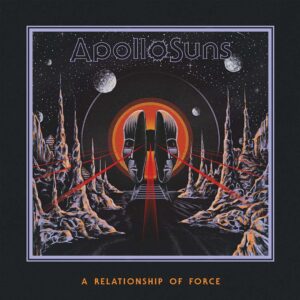 Award-winning Canadian jazz group Apollo Suns have announced Nov. 26th, 2021, as the release date for their third EP, A Relationship of Force. Inspired by watching a waterfall in British Columbia while the band was touring Western Canada, the new EP (produced by Keith Price) reflects the band’s distinctive jazz voice and musical vision. Says Ed Durocher of Apollo Suns, “We want the album to represent moments of life, some of which are more aggressive, quiet, soft, adventurous, or hopeful. We want to embrace the conceptual side of music to show that all these individual tracks are just expressions of all these moments in life.” 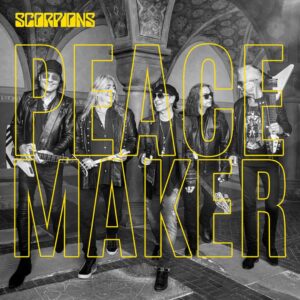 On Nov. 3rd, 2021, German rock icons Scorpions (“Rock You Like a Hurricane”) released their new single “Peacemaker” to whet the appetites of fans for the band’s upcoming album, Rock Believer, scheduled for release on Feb. 25th, 2022.

Sounding like a fresh release from the band’s heyday of legendary rock, “Peacemaker” was written by singer Klaus Meine as a hopeful vision of the post-pandemic world. “At a time when so many people have died and are still dying from COVID, from senseless wars, and other senseless crimes,” says Meine, “it makes you feel that the undertaker must be working overtime. In a peaceful world after the pandemic, it will be time for the peacemaker to rule… That’s an image that really appeals to me.”

That’s an image that appeals to RCS Music News Weekly as well. 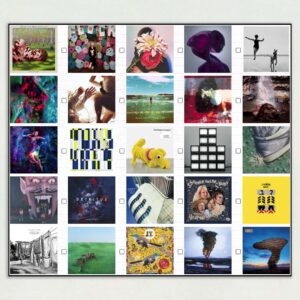 The Cover Art Nominees Are In! 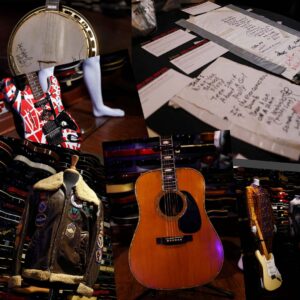 Looking for a one-of-a-kind gift this holiday season? Over 900 items from some of the world’s biggest music stars hit the auction block this weekend at the Hard Rock Café in New York. Topping the lot is a Martin acoustic guitar owned by Eric Clapton. Played on stage by Slowhand during a 1970 concert in London, the guitar is expected to fetch $300,000 to $500,000.

Looking for something more budget-friendly? A guitar played by the King is expected to fetch around $90,000.

Other items up for grabs:

Got a Gig Coming Up?

Promote your next gig, album/single release, video release or whatnot in RCS Music News Weekly. No cost. Simply DM your info to @RCSGuelph or email info@royalcitystudios.ca. No gig or release immediately coming up? Add RCS to your promotion list. And subscribe to the RCS mailing list because (to paraphrase Steven Tyler) you don’t want to miss a thing.

Until next time, stay awesome.