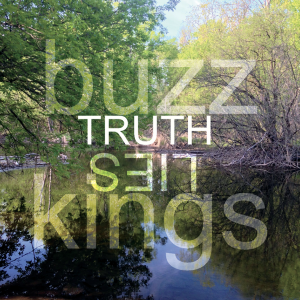 The band had planned to kick things off with a CD release party, but COVID shut things down. Or, as Seinfeld’s famous Soup Nazi might have said if he’d been in charge of Ontario lockdowns and restrictions, “No CD release party for you!”

“We released the first single, ‘Fake News,’ ahead of the album,” says guitarist/producer Paul French, “with a great video from the guys at 416Film, and then the world shut down. We kept planning to release it, but the goalpost just kept moving. Finally, we said, ‘Let’s do it now!’ Art isn’t meant to live on the shelf.”

Containing 13 eclectic songs showcasing the different sides of the band, who performed at Royal City Studios’ 2019 Classic Covers Cool Cars concert event, “this album rockets us through a galaxy full of different experiences,” says vocalist Andrew Kramer. “We explore different sub-genres of rock, like alt-rock, reggae, country, and hard rock, along with different lyrical themes covering everything from politics and literary fiction to relationships and sports.”

The Buzz Kings perform in 2019 at Royal City Studios.

Their debut CD, There Goes the Neighborhood, dropped in May of 2017. 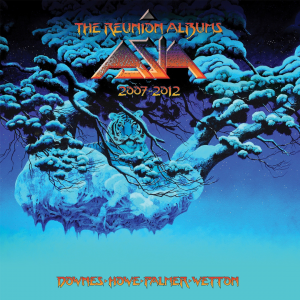 What’s more exciting than BMG Music’s slated June 11th, 2021 release of the 5-CD Asia boxset The Reunion Albums: 2007-2012? If you unashamedly geek out over album cover art like one RCS Music News Weekly writer (who happens to be writing this), it’s the new Asia cover art by legendary Yes album cover artist Roger Dean, who basically invented “floating islands” artwork, and didn’t appreciate James Cameron ripping him off in Avatar. 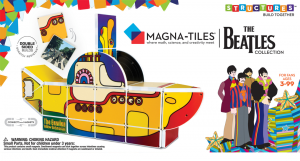 Magical Mystery Magna-Tiles Coming in May

Just when you thought shelves couldn’t possibly fit more Beatles merch, toy company CreateOn has licensed Beatles imagery for use in their Magna-Tile toys, available in late May at CreateOn and the Beatles store on Amazon.

CreateOn VP Steve Rosen envisions the tiles giving families “a whole new way to bring the iconic Beatles imagery to life and build together.” RCS Music News Weekly envisions at least one parent struggling to explain to a baffled child how a Beatle can be a walrus and why so many egg men were involved. 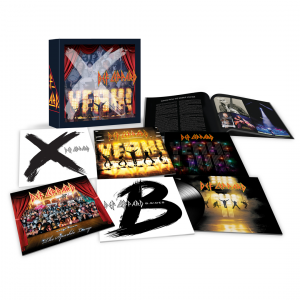 UMe/Virgin will release Def Leppard – Volume Three as a limited-edition vinyl-CD boxset on June 11th. Featuring tracks from the Leppard albums X, Yeah! and Songs from the Sparkle Lounge, the set includes a rare collection of B-sides that have never appeared on vinyl, live recordings, and… well, basically enough music to cause hysteria for Leppard fans. 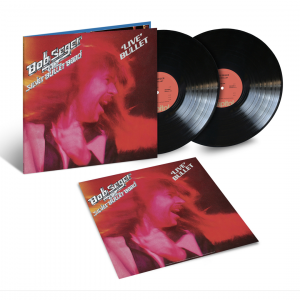 Also available on vinyl on June 11th, Capitol/UMe will re-release ‘Live’ Bullet by Bob Seger & The Silver Bullet Band. Called one of the best live albums of all time, the vinyl re-release will be offered in two formats:

And the cool vinyl colors just keep on coming! 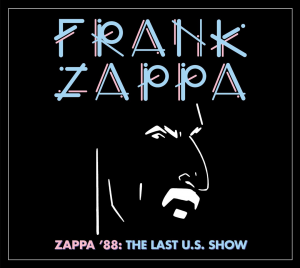 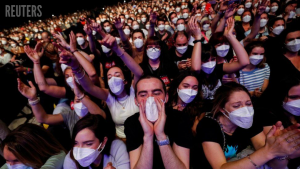 A few days ago, 5,000 people took part in rapid COVID-19 tests, wore masks, and crammed into a trial concert in Barcelona. The concert was one of the largest gatherings in Europe since the pandemic began and (as reported by the BBC) there were no signs that COVID transmission took place.

A month ago, a similar event took place in the Netherlands.

Concert organizers hoped the findings would give hope to what Reuters described as “the moribund live-music sector.”

RCS Music News Weekly didn’t know what “moribund” meant either and discovered it means at the point of death. (A little dramatic, but hey, we learned a new word!)

COVID case numbers continue to trend downward in Guelph. RCS Music News Weekly felt this qualified as music news. Given that COVID and music are entwined, downward-trending numbers sounded like music to our ears, and RCS Music News Weekly hopes the province is still on track to spring the locks come May 20th.

Nope, it’s not some concert event to convince everyone to get the jab. On May 8th, the international advocacy organization Global Citizen will switch on the amps for Vax Live: The Concert to Reunite the World in a call for new commitments from governments, the private sector, and philanthropists for an equitable worldwide distribution of COVID-19 vaccines and donations for doses via COVAX.

Check out the full star-studdedness at the Global Citizen’s Vax Live page. 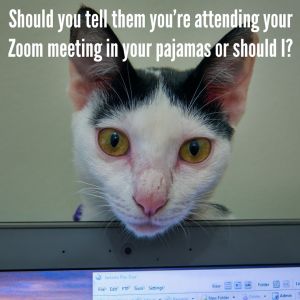 What’s this got to do with music?

Let’s start with a question.

Which would you prefer? Fighting traffic five days a week while dressed up in office clothes, or leisurely days spent working remotely at home while eating nachos in your sweatpants?

If you chose the latter, so did many others.

According to an April 23rd survey by Flexjobs, a whopping 65% of 2,100 people surveyed said they want to keep working from home after the pandemic ends, and 58% said they’d look for a new job if they have to return to an office.

All of this speaks to headlines published by Forbes, the BBC, and other media companies. COVID’s smackdown of traditional work life may have changed the world of work forever. Indeed, in reflection of this, Flexjobs recently reported that 23 companies were switching to long-term remote work, and a quick Google search will show you that many other companies are thinking of either doing the same or changing to a hybrid model.

This is not to say that people want to stay indoors all day when lockdowns lift.

When live concerts return, you can bet people are going to rocket out the door like cats running from a vet. Yet with so many people poised to remain home during the workweek, logic suggests the new optimal times to engage people on social to promote live shows, releases, etc., may remain optimal times.

If you missed these times, here are the new best days and times to post on social.

The data also suggests that, where some bands may be ready to abandon daytime fan engagement, any abandonment should represent a promotional opportunity with fewer bands vying for fan attention.

If you’re reading this as a blog and want to get RCS Music News Weekly delivered straight to your inbox, subscribe to Royal City Studios’ mailing list.

Sure, you may have heard that RCS Music News Weekly may not be the right kind of music newsletter to have dropping into your inbox each week, and we get it. Yes, there was that time we swung from that scaffolding at that concert, but why let minor misdemeanors stop us from being friends?

As always, we hope you’re doing smashingly. Stay healthy. Stay awesome, and if you want to pre-book rehearsal space for post-lockdown rehearsals (or just want to get your musical ya-yas out), click here to book.