In an earlier blog about the RCS Open Rock Jam at Royal City Studios, the Guelph rehearsal space and recording studio, we spoke about three things that will always be true in music (and life):

The evidence to these three truths presented itself on Friday, July 19th, when Guelph Mayor Cam Guthrie (long-time musician and great drummer) and his wife Rachel (an amazing singer) dropped by Royal City Studios to:

Formerly of the Guelph-based band Fitness Club Fiasco, Mayor Guthrie was further invited to sit in and play drums with two bands at the Guelph rehearsal space: first with members of the Guelph jazz band Valet and afterward with the Fossil Rockers, a classic rock cover band that performs in support of local charities. And although Mayor Guthrie hadn’t rehearsed the songs that the bands were playing, he happily and easily slipped into the groove to nail each song. Moreover, Mayor Guthrie approached each jam with his characteristic enthusiasm, which imbued musicians with the same, and the overall sense of fun and energy that radiated from that was palpable throughout Royal City Studios.

As a reflection of Royal City Studios’ vision of creating a supportive musical hub for artistic development and opportunity, Mayor Guthrie followed his jam with Valet by presenting them with an unexpected opportunity. He asked them to perform in December at the Christmas tree lighting ceremony at Market Square in downtown Guelph.

To facilitate such connections on an ongoing basis, Royal City Studios hosts a recurring event called Open Rock Jam. Open to all ages and skill levels, Royal City Studios’ Open Rock Jam provides an opportunity for Guelph-area artists to connect with fellow musicians at the Guelph rehearsal space, learn songs in an encouraging and supportive environment, and perform the songs at the end of the evening. 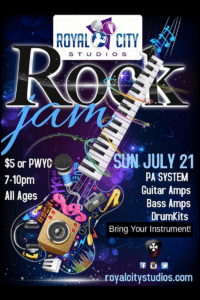 Located at 930 Woodlawn Road W., Unit1, Royal City Studios is a one-stop enclave for the arts and artistry, with seven rehearsal studios (each with acoustic treatment and physically separated from each other) and a fully equipped recording studio, all at highly affordable rates for accessibility to any artist of any skill level on any budget. (Small rehearsal spaces start at just $5 per hour per person.)

Each rehearsal room comes with amps, basic PA equipment and pristine drum kits tuned by a professional sound engineer. Royal City Studios also has water, coffee, tea, snacks and refreshments on hand to fuel your work. The facility is fully accessible, and Royal City Studios has replacement strings (acoustic and electric), drumsticks, XLR cables, adapters, batteries and more should artists need something after the music stores have closed. So, all artists need to do is walk in, plug in and play. 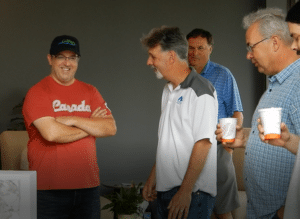 Royal City Studios also has a live performance venue on site for bands wanting to stage their own live shows or rehearse live shows before area gigs or events like Hillside Festival. The performance venue is also perfect for album release parties, clinics, workshops and other events. During the day, Kat Studios utilizes the performance space to run their summer camp program, an arts program for children age 5-15 to develop their acting, singing and dance skills in a fully accessible and safe space. Open to children of all skill levels, the program includes acting scene work, script reading, creative writing, original song creation and an introduction to percussion instruments.

We use cookies to ensure that we give you the best experience on our website. If you continue to use this site we will assume that you are happy with it.OkPrivacy policy